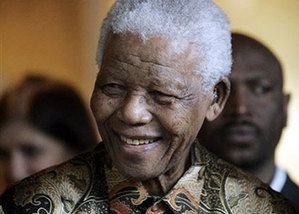 The condition of former President Nelson Mandela, who is still in hospital in Pretoria, has become critical.
President Jacob Zuma, accompanied by ANC Deputy President, Mr Cyril Ramaphosa, visited the former President this evening, 23 June in hospital. They were briefed by the medical team who informed them that the former President’s condition had become critical over the past 24 hours.
The President and Mr Ramaphosa also met with Mrs Graca Machel at the hospital and discussed Madiba’s condition.
“The doctors are doing everything possible to get his condition to improve and are ensuring that Madiba is well-looked after and is comfortable. He is in good hands,” said President Zuma.
The President and Mr Ramaphosa were assured by the doctors that when the ambulance transporting former President Mandela to hospital on the 8th of June developed engine problems, all care was taken to ensure that his medical condition was not compromised.
“There were seven doctors in the convoy who were in full control of the situation throughout the period. He had expert medical care. The fully equipped military ICU ambulance had a full complement of specialist medical staff including intensive care specialists and ICU nurses. The doctors also dismissed the media reports that Madiba suffered cardiac arrest. There is no truth at all in that report,” said President Zuma.
President Zuma has appealed to the nation and the world to pray for Madiba, the family and the medical team that is attending to him during this difficult time.
Enquiries: Mac Maharaj on 079 879 3203 / macmaharaj@icloud.com.
Issued by: The Presidency
Pretoria”

“Zuma should learn from Lula”.

“It is an intriguing idea, partly because the two men have so much in common. Both are political outsiders from poor backgrounds. In the 1950s Mr Lula da Silva sold peanuts and oranges on the streets of Sao Bernardo, a working class suburb of São Paulo. During the same period Mr Zuma was herding cattle at a village in rural Zululand.

Both men have dedicated their lives to the cause of revolution. Mr Lula da Silva as a trade union leader and a founder of the leftwing Workers Party; Mr Zuma as an activist underground, in prison and in exile for the African National Congress. Both are affable men, good at listening and negotiating. Mr Lula da Silva won concessions for his members. Mr Zuma helped to parlay an end to the violence between the ruling ANC and the Zulu Inkatha Freedom Party that rocked KwaZulu Natal in the late 1980s and early 1990s.”